If one were to analyze the traffic sources responsible for driving conversions in the old version of GA, he or she could underestimate the value of a particular source. The old version fails to demonstrate what sources may have contributed to a conversion. Consider the following data:

When looking at this report (Traffic Sources -> All Traffic Sources -> Ecommerce), one could assume that Google organic traffic was responsible for 7 transactions, $1,575.90 in revenue, and converted at 0.95%. It seems fairly straightforward. And yet, such an assumption would undermine the true value of Google organic traffic to this particular site over the past 30 days. Let’s move over to the new version of GA to get a better understanding of what I am talking about. First, a quick screenshot to point out where you can access the Assisted Conversions report from the left-hand navigation of the dashboard: 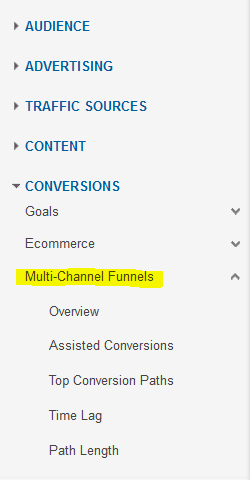 Assisted Conversion Report and Why It is Awesome

One Multi-Channel Funnel report is the Assisted Conversions report. This report demonstrates what sources may have contributed to on-site conversions over a pre-determined (whatever you have GA set to) time frame. This report helps answer the following questions: “What traffic sources were accessed along the way for visitors that arrived at the site via multiple channels prior to converting?” And more importantly, “Where did these visitors originally come from and how can I assess the true value of a particular source?” Using our current example, let’s take a look at the Assisted Conversion data for the same time period that we were looking at in the old version of GA (last 30 days):

*It is important to note that I have clicked over to the Source/Medium tab under “Viewing”. When analyzing this report, it becomes evident that Google organic traffic was responsible for assisting in 11 conversions over the past 30 days, in addition to the 7 conversions reported in the old version of GA. Those 11 conversions resulted in $1,286.65 in revenue. The 11 visitors that converted actually conducted a search in Google at some point. They returned to the site through another source before converting. As a result, the conversion itself is not attributed to Google organic traffic. Remember, GA attributes a conversion to the last source that referred the visitor.

But is an assist really important?

No – only if the visitor originally came from the source credited with the assist. You need to go one step further and access the Conversion Path Report (not new) under Multi-Channel Funnels:

*It is important to note that I have clicked over to the Source/Medium Path tab under “Viewing”. This report lays out the channels that were involved in each conversion (for our example I have condensed the report to display only 3 paths). From here, you can identify conversions that originated in one source but were credited to another. Consider conversion #11. This visitor originally arrived at the site via Google organic, but later returned directly before making the purchase. Thus, the conversion is attributed to “Direct”, whereas “Google Organic” gets credit for the assist. Now, let’s take it one step further and identify what keywords this visitor (whose conversion was attributed to another source) used to originally find your site. All you have to do is click on Secondary Dimension (highlighted below) Traffic Sources -> Keyword (Or Source/Medium) Path:

Boom! Well, kind of. Unfortunately for conversion #11, Google strikes us down with (not provided) keyword data – this visitor was signed in to a Google account and their search query encrypted. But for visitors not signed in, this report can actually tell you what keywords were used to find your site and essentially initiated the conversion process. Had you stuck to the old version of GA, this conversion would have been attributed to another medium entirely –Direct – and there would have been no other way to know that a search query played a role. Determining the most valuable keywords to your campaign, and more importantly, your ROI from a particular traffic source is difficult enough in the world of search engine marketing. Don’t shoot yourself in the foot by sticking with the old version of GA, and best of luck with the new reports!