Newsjacking sounds easy in theory. You jump into a major story or trend, use it to reach influencers, build links, generate social media traction and drive site traffic. Then you profit. Sure, this is easier said than done, but that doesn’t mean you can’t still do it. When newsjacking is successfully done, it usually works for the following reasons.

Before we get into the “news void”, let’s take a quick look at what the news cycle actually looks like in real terms. Remember the Ice Bucket Challenge? Here’s a quick refresher, in case you were spelunking at the time. Last summer a campaign erupted organically across social media, in which pretty much everyone was challenged to dump a bucket of icy water over their head to raise funds for the ALS Association. The campaign took place for about a month, spreading from a few odd videos on your Facebook feed to the lead story on most cable news shows for what seemed like the entire month of August. From an organic search point of view, here’s what that kind of viral story looks like.   Pretty crazy spike, right? Now think about this story from a publisher’s point of view.

This story is going viral, which means that every Internet user their mother is Googling it. We need traffic, so we need to write “Ice Bucket Challenge” stories. But what do we write about? Celebrities nominating each other? Damn it, People already wrote all those stories. How about we talk to the charity itself? They already spoke to Time? Crap. So what do we write about?

A news void is the thought process above. Publishers want to write a story on a subject, but they need an angle. OR they’ve got an article in the works, but they need a socially shareable piece (like a graphic or an animation) to help it spread. And this is a huge opportunity for content marketers. So what does your content need to fill that void? Here’s a few pieces that can help you get over the hump.

Propriety research or data is the most valuable asset you can offer to fill the news void. You can then leverage this research in many different ways, maybe even getting interviewed on the topic for top tier publications that are looking to cover your data. Note too that the data itself doesn’t have to be new to be newsworthy, it just has to be relevant to the story. I know that sounds a little vague, so here’s an example. This year, in the week leading up to Lollapalooza, there was a news void in Chicago. Lolla was coming, and there was a ton of build up, but not a whole lot to talk about. Weather was nice. Zoning permits were all in order. So Lurie Children’s Hospital visualized and publicized some data from 2014, showing that Lolla weekend was a huge outlier for underage drinking. 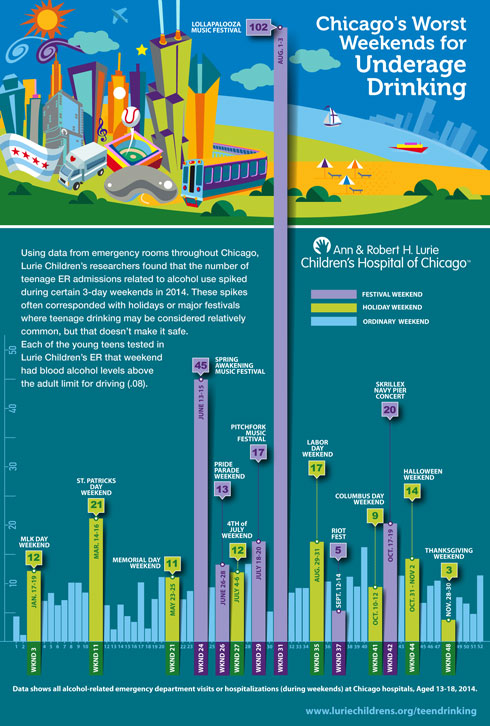 Even thought the data was a year old, it was still fascinating. And so it filled the news void, and went viral.

We’re don’t all have access to interesting data, and it isn’t always possible to discover new findings and do new research in a field. This means you’ll need to get a little more creative, by using existing data that’s been published elsewhere. Once you’ve found some interesting data, you have a few options.

You can also combine any and all of the above to come up with a unique take on existing data. Here’s what that looks like in practice. Back to our Ice Bucket Challenge example, we saw the opportunity to capitalize on this trend when working with a client in fundraising consulting. Our client had seen some data from The Chronicle of Philanthropy showing how many donations were coming in to the ALS Association each day. We combined this with total and daily donation data to spot a new trend. While it looked like the Ice Bucket Challenge was an unstoppable force, it had actually been slowing down since about mid-August. The infographic we created to visualize the data was featured on Forbes, Sports Illustrated and The US Department of Commerce. To find out more about the piece, check out the case study below. While proprietary research may be tough to come by, anyone could have created the ‘Ice Bucket Challenge’ infographic. It was just a matter of finding the part of the story that hadn’t yet been explored. However if the creative juices aren’t quite flowing for you, and you can’t find research to put a new spin on a trending story, there’s another option.

Ask yourself how this story affects a particular interest group. Does it have a unique or concetrated impact on seniors? Veterans? Business owners? Finding a unique angle on how a story impacts a specific group of people can help you spin a given trend or news story into a linkeable asset. If the niche is a small one, it might not quite “go viral”, but it’ll still give you newsorthiness beyond that of a more evergreen piece.

Obviously proprietary research and findings are always great, but they can be hard to come by. Making sure that you can put a fresh spin on a story idea is key. Interpreting data in a new way, or spinning it for a specific niche can really help you get traction with that niche and can help you create a piece that’s newsworthy, topical, and organizally shareable.