In late 2018 Google updated their display targeting settings for GDN (Google Display Network) campaigns. As Google put it at the time, this update “simplified” the targeting options and essentially removed advertisers’ abilities to easily remove mobile app traffic. At surface level, it looked like we were all left with a choice – do we want mobile traffic, or not?

Google seemed to respond, that  it had to be all or nothing. Take it or leave it. Advertisers and account managers were generally not very happy with this change.

How Google Ads used to work

Display has been an ad tactic for nearly as long as the modern commercial internet has existed. It’s always been a good way to get a message in front of an audience. Not all that targeted, display ads are essentially digital billboards.

As technology evolved, so did the targeting capabilities – allowing advertisers to better select who they served ads to based on their chosen criteria. With the rise of mobile usage, advertisers began seeing more and more traffic originating from mobile when they looked at their display ad placement breakdowns. Along for the ride with mobile traffic, we started seeing more and more ad placements from mobile apps as well.

Before Google’s update, our main line of defense against undesirable mobile app traffic was adding adsenseformobileapps.com as a placement exclusion and selecting “GMob” as a category exclusion. Though these options simply went away. For years, a savvy account manager could quickly and easily remove apps placements from their GDN campaigns. In fact, many of us were happy with that way of working, knowing our client’s ad spend was sheltered from poor-performing app placements.

By most accounts, most web traffic is now mobile. And today, if you’re using display ads and you’re not careful, you are likely to see an uncomfortably high percentage of that traffic coming in from mobile apps.

Early on in the digital marketing world, it was common to see advertisers completely exclude mobile. Why? Because it just didn’t have the volume of conversion signals advertisers came to expect, especially when compared to high-intent channels such as search or well-honed desktop display campaigns. As marketer’s understanding of mobile customers and their habits evolved, so did their willingness to ensure mobile was part of their strategy.

Why did we want to exclude apps?

Apps generally perform terribly compared to other ad placements. And I’m not talking 0.25% CTR in display terribly – in fact, this CTR is dang close to average. Sometimes you’ll see something like this:

Which means this mobile Tinder app ad had a better CTR on Tinder than I would get on my profile – even after some careful optimization. Let’s run down the performance here: the advertiser’s getting a lot of clicks, the clicks are reasonably cheap, however, the bounce rates are extremely high, the engagement rates are nil, and the conversion rates simply don’t exist.

Additionally, ad placements in apps is frequently spammy or even shady.  A good deal of mobile app ads feed more accidental clicks than customer driven click events. This is bad for advertisers in a cost per click model – which is how Google Ads users most often select to pay for ads.

Look at these placements:

As a quick side note: unless it becomes a problem, I typically continue running app traffic for remarketing campaigns.  While I think the same issues apply for our remarketing audience, app traffic is generally very cheap, and you don’t see quite as much mobile app traffic volume come through from a targeted remarketing audience. Getting in front of an interested party exerts an influence, even it is just to be top of mind during the decision-making cycle.

There are a few ways you can act against app traffic in your Google Display Network campaigns. I’ll outline these here, saving my favorite for last.

This is incredibly tedious, and completely reactionary, but you can certainly go this route. To move forward here, select your chosen GDN campaign, go to “Placements” and to “Where ads showed.”

From here, you’ll be able to view all the placements on which you received a click. Next click into the radio button next to each placement (mostly apps) that you’d like to exclude in your campaign moving forward. 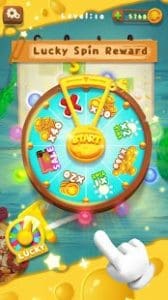 While further researching this subject over the years, I found no end of people upset with the situation.

You see a lot of folks on the forums at wits end – some even suggesting that you just set mobile bid adjustments to -100%, effectively removing mobiles ads from your advertising repertoire.

Though still others justly complained because they were individually excluding app categories, and some seemed impossible to remove completely. In such a case, maybe giving up entirely on mobile display ads starts to feel like the best option. But it seems like excluding mobile wasn’t really a good solution either, buy instead just shifted the problem, for some users.

While the -100% mobile bid adjustment isn’t a perfect solution, but hey, it will end the mobile app traffic problem… As long as you also put a -100% bid adjustment on tablet as well.

Another way to exclude app traffic exists in Google Ads Editor. This is how you can access more powerful category-level exclusions. Under “Keywords and targeting” you’ll find an entry called “Mobile app categories, Negative” (and make sure you’re going to Negative!). 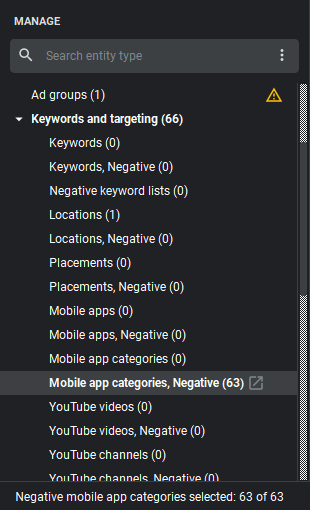 In the Manage section, under “keywords and targeting”, you’ll find an option labeled “mobile app categories, negative”. This allows you to bulk add all 148 mobile ad categories at the campaign or ad group level between Apple, Google Play and Windows

While we haven’t tested this method extensively (since we will typically just use the next method when we feel mobile app advertising is unwanted), I have heard that this option does not fully exclude all apps as some of them live outside of the available categorization, and further – some apps made by Google apparently simply can’t be blocked this way.

4. Nuke the entire site from orbit. It’s the only way to be sure.

Ah, now we’re to the holy grail and the exclusion we here at DTC swear by.

Adding mobileappcategory::69500 as a negative placement seems to have the best impact and completely (in our experience, so far) eradicates the app placement problem. Again, maybe not something we want to do in all cases, but I’m sure glad it’s an option.

To do this, at the campaign level, head back over to “Placements” and this time go to “Exclusions”, hit the “Edit” button, make sure you’re selecting the “campaign” level, and plop in our friend, mobileappcategory::69500. Add your single placement as an exclusion and say goodbye to annoying app traffic in your GDN campaign. 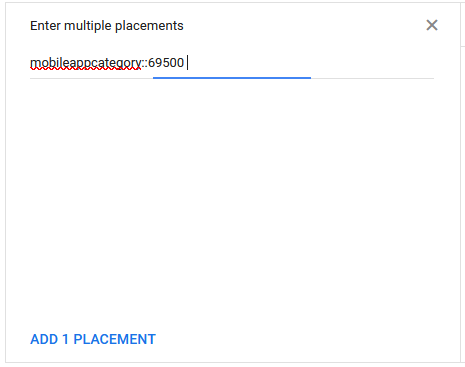 If you want to read up further on excluding placements, check out this Google help page. It’s surprisingly difficult to find information about truly excluding app traffic from the Google Display Network.

Google’s help page doesn’t reference mobileappcategory::69500, and further, I had to go to the AdWords API help page to find reference to this “criterion ID.” Google Ads does not make it as easy as it should be to block your ads from showing up on apps, and it’s one of the first things we look at when evaluating prospect’s accounts if they are running any Google display ads.

Regardless of your specific goals, I’d encourage you all to dive deeper into what causes what in your accounts and always be looking for ways to do more of what works and less of what doesn’t. In our experience, here at DTC, mobile app ads are not a good use of our client’s budget, and outside of remarketing, we’ll continue to recommend that we broadly exclude all apps from our client’s GDN campaigns. 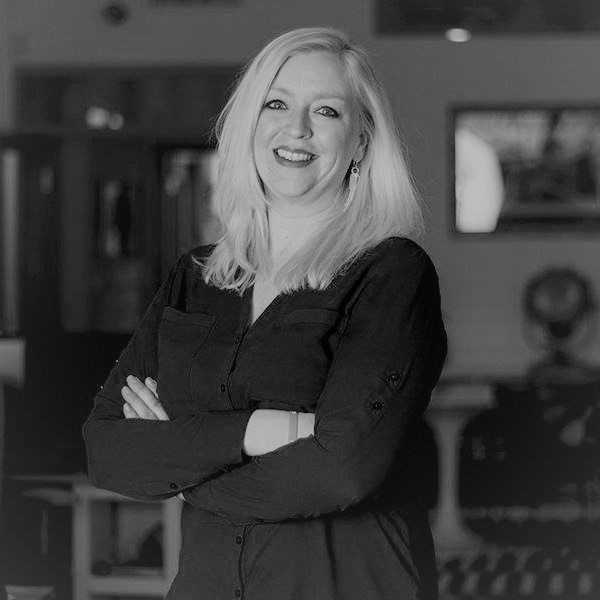