Where Does Crime Spike on St. Patrick’s Day?

St. Patrick’s Day is notoriously one of the biggest drinking holidays of the year. In cities across the US, streets are lined with parade-goers as bars fill with green-laden patrons ready for a day of booze and fun.

But, of course, some people overdo it. St. Patrick’s Day wouldn’t be itself without a flurry of tickets for disorderly conduct, public intoxication, and public urination.

To find out where people are behaving worst, we analyzed cities with notable celebrations and looked for spikes in the number of crime incidents on St. Patrick’s Day weekend, 2018. 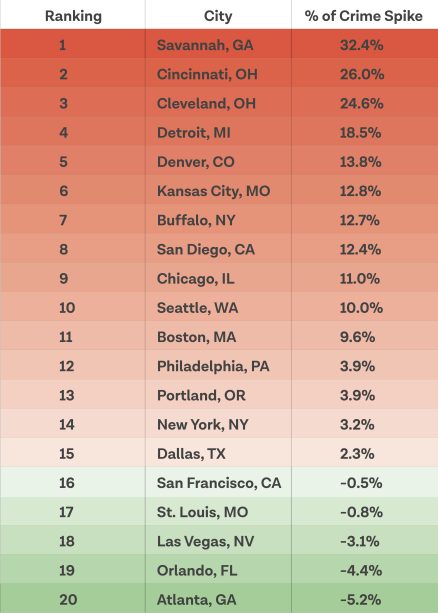 It was interesting to see that some of the most iconic party cities like New York, Boston and Philadelphia experience only slightly above-average arrests over the course of St. Patrick’s Day weekend, while smaller cities like Savannah, GA and Cincinnati, OH saw significant spikes in crime.

For example, Savannah, Georgia has a population of fewer than 150,000, but it’s parade is known to draw crowds twice as large. Similarly, Cleveland draws a crowd nearly half as large as its own population for its St. Patrick’s Day celebration, and both Savannah and Cleveland fall at the top of our ranking for increased crime over the holiday weekend.

Metros with larger populations and higher volume of tourists year-round, like New York, San Francisco, and Dallas, experienced only slight upticks in criminal reports. It’s possible that these are more accustomed to handling large crowds and events, or that St. Patrick’s Day, while public and loud in its celebrations, doesn’t yield greater chaos for the cities themselves.

However, the rowdiness may be tucked away in notoriously rowdy St. Patrick’s Day celebrations in cities like Chicago, Boston, and Seattle. These cities saw crime spike nine to 10-percent during the 2018 festivities. A  notable increase for the year-round tourist hubs which are no strangers entertaining crowds and festivals on non-St. Patrick’s Day weekends. Maybe it’s the green beer and parade floats, but something is causing these cities to get a little out-of-hand on March 17th.

To get a pool of cities for analysis we looked at rankings for the largest St. Patrick’s Day parades in the United States as well as the WalletHub analysis of the cities with the best “Irish Traditions.”

We then pulled data from local city police reports and crime blotters for the four weekends in March 2018: March 3 & 4, March 10 & 11, March 17 & 18, and March 24 & 25. We averaged the number of incidents in the first, second, and fourth weekends of march to get an estimate of what a typical weekend at that same time of year looks like for local authorities. We then calculated the percent increase or decrease for the crime reports on the Saturday and Sunday of St. Patrick’s Day weekend in 2018.