The cannabis industry is more competitive than ever.
With changing legislation and tremendous industry growth,
you need a partner to help you navigate your digital strategy.

The cannabis industry is expanding nationwide.
Make sure your brand reaches a growing pool of potential customers.

Our process is grounded in original research, tailored to your company.
We've earned cannabis clients media coverage in the best publications here and abroad.

We'll help you find the right strategies to achieve your goals.

Support for cannabis legalization is growing in the United States and the cannabis industry is exploding right along with it. As new states continue to legalize, those living in cannabis-unfriendly areas are likely wondering when they’ll be next and where they can buy.

For companies looking to break into the “green” market, there’s no better time to sell your services – but with cannabis legality varying from state to state, it’s important to get it right.

In order to find out where America’s most cannabis-curious are located, we recently analyzed Google searches in all 50 states and in 34 of the largest cities where cannabis is not yet fully legal. In addition, we surveyed over 1,000 Americans to learn more about their feelings on cannabis legalization, cannabis use, and marketing in the United States. 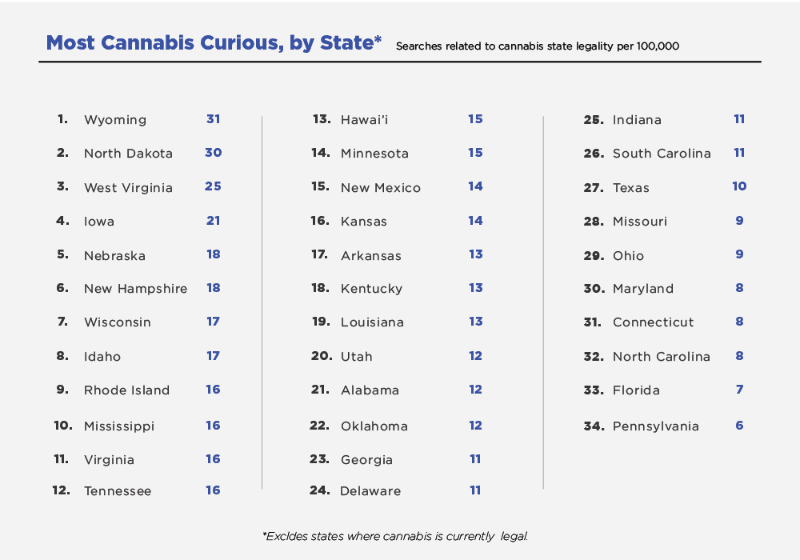 Those most interested in legality seem to be centralized in the American west, with Wyoming topping the list (no.1) with its nearby neighbors North Dakota (no. 2), Iowa (no. 4), and Nebraska (no. 5) rounding out the top 5. West Virginia is the odd man out in the 3rd slot, representing the East Coast.

Southern and Eastern states with mixed legality rank lowest on our list, including Maryland (no. 30), Florida (no. 33). and Pennsylvania (no. 34). These states have medicinal programs, different laws around CBD usage, and some have even decriminalized cannabis.

We found significant search volume inquiring about legalization in states where cannabis is already on the books, most notably, high search volumes in Alaska.

Most Cannabis Curious, by City

America’s major metro areas are hubs for all kinds of businesses. But is the same true for canna-business? We looked at interest at the city-level, analyzing search queries surrounding questions of legalization in 34 of the country’s biggest cities. 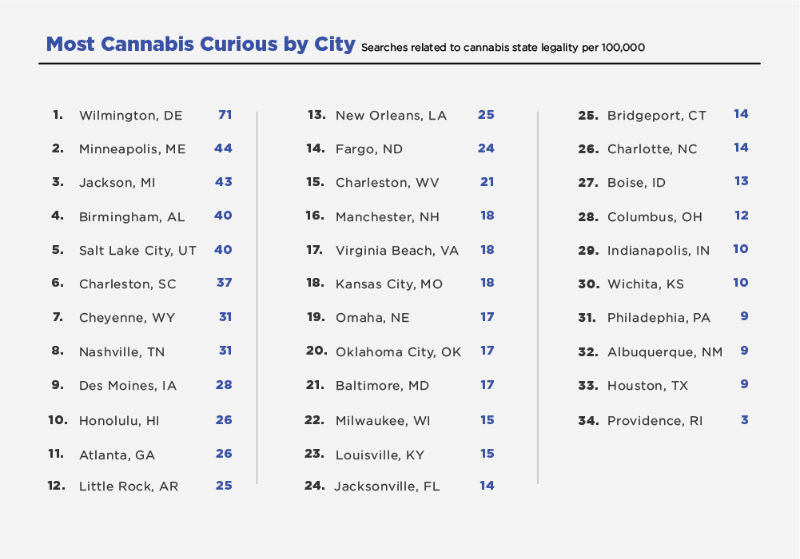 Interestingly, the top 5 cities that are searching for state cannabis legalization are all located in states where cannabis is completely illegal with Southern and Western states taking the lead. Birmingham, Alabama wins the number 1 slot with Charleston, SC (no. 2), Cheyenne, WY, Nashville, Omaha, and Charlotte not far behind. 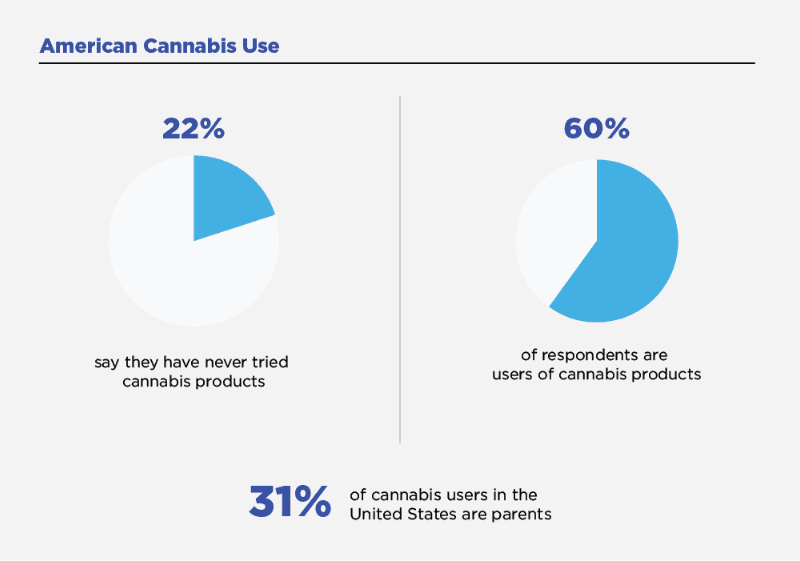 Also, not all cannabis users are interested in purchasing from a dispensary – if given the opportunity, 55% of our respondents would “grow their own,” with the most would-be home growers hailing from Montana (no. 1), Arizona (no. 2) and Connecticut (no. 3).

A whopping 92% of Americans we surveyed are on board with cannabis legalization with 67% looking forward to both medical and recreational use and 25% for medical use only. 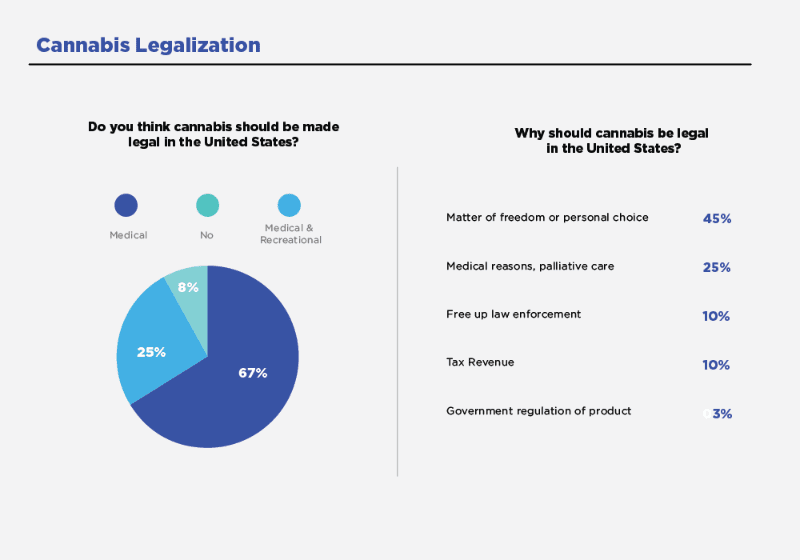 When it comes to why cannabis should be made legal in the United States, answers ran the gamut. The most popular reason? Freedom. Forty five percent of respondents believe that cannabis use is a “matter of freedom or personal choice,” with medical reasons (25%), and freeing up law enforcement (10%) rounding out the top three reasons. 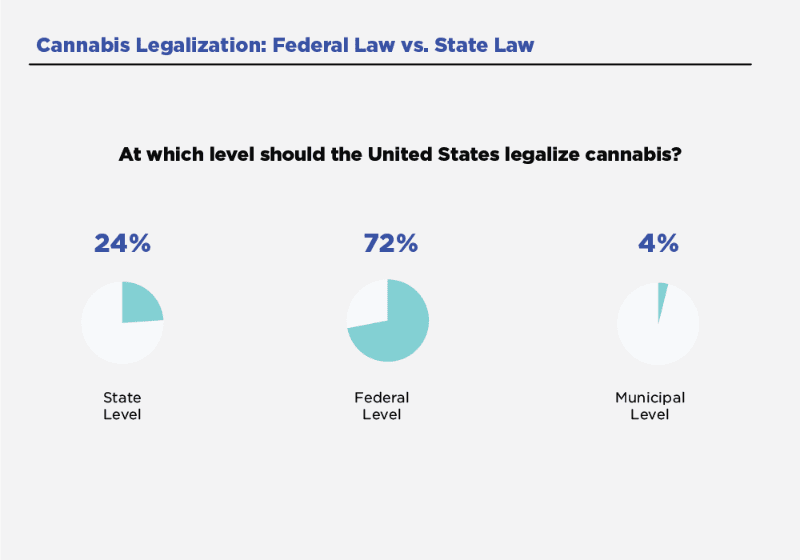 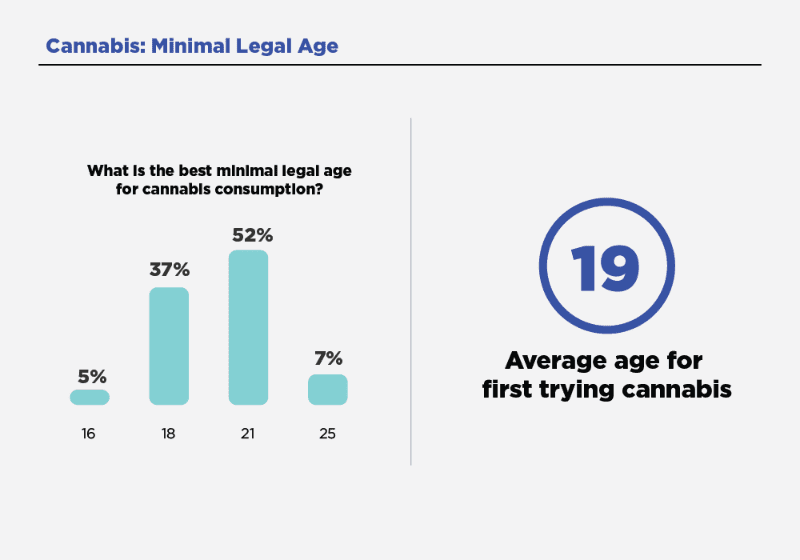 When asked about the best legal age for cannabis consumption, 52% of respondents believe that 21 is the best age, with 18 not being far behind. Seven percent settled on 25 – which some scientists believe is the best age to begin for brain health.

Without a doubt, the cannabis industry is booming in the US. This raises questions about where and how cannabis products should be marketed and sold. Much like restrictions on alcohol, nicotine, and pharmaceuticals, cannabis has restrictions in place on advertising that often shift state-to-state.

We asked our respondents to weigh in on cannabis advertising and nearly 40% liken cannabis to alcohol and believe similar advertising restrictions should be on both. The Future of Cannabis Legalization.

What does the future hold for cannabis? Well, that’s up to lawmakers. But we asked our respondents whether they felt the trend towards more widespread legalization is hurtful or helpful to society. The overwhelming majority (81%) believe legalization is helpful.

While we’ve barely scratched the surface when considering the implications of cannabis legalization in the US, one thing is clear: cannabis is here to stay.

Using the Google AdWords platform, we analyzed total search volume for more than 100 phrases and questions related “when cannabis will be legal in [state]” as well variations of those keywords and phrases to account for more colloquial terms for cannabis like “weed,” “pot,” and “marijuana”. Search volume for these phrases and keywords was analyzed over the period of March 2020 to April 2021. Total search volume during this period was then calculated per capita and visualized per 100,000 for each state and largest non-legal city.